have any questions about my posts, travels, or adventures? Send me a message and I might get back to you in a reasonable amount of time. Thanks!

Now you may be thinking to yourself, this sounds way to tame to be a Laney trip. She hasn’t died yet? Where’s the chaos? The story? The unforgettable moment? This is the girl who pepper sprayed herself for pity sake. Well here you have it. I present unto you:

Setting the scene: That night, following the fantastic tour where I killed every technological device I own. However, I finally made it back to the hotel because I memorized street addresses on the map before my phone died. Yeah, pathetic I know. But I’m not still wandering the streets of Rome so….

Anyways, when all of my technology had charged I was encouraged to go “experience the Rome night life.” Yeah… not my scene. Not that I tried very hard. My mission in Rome was of a sight-seeing nature, not a social visit. As such, I departed at 10pm with phone in hand in search of a fountain I looked up that was supposedly contained incredible carvings.

Two hours later, soaking wet, and none the more cultured, I returned to my hotel room with pictures of my fountain and a less than enthusiastic disposition about the Roman night life while traveling solo.

First of all, my hotel was located quite close to the Vatican City by only a few blocks. Can anyone imagine the Pope and his Cardinals going shot for shot at any clubs near by? No, no one? That’s because they’re aren’t any.

Instead there are poorly lit streets with dim little lamp posts smattered around the block. The glow of these archaic lights barely drift through the thick canopy to illuminate scared little tourists huddling against the old crumbling buildings, the fear in their faces lit by dim phone lights as they struggle to find their destination. Each honk, each rustle of leaves, each pounding footstep, and loud Italian voice from inside a household makes the poor tourist jump and skitter further down their path. In short, the perfect setting for a new Taken movie.

As for my fellow tourists and Italian youth? Forget about it. There was no bright Italian laughter as young women sweep from cafe to cafe with wine and a whisper of a smile on their lips. No handsome Italian men offered to whisk me away on their Vespa into a more lit area. To be honest, I would have screamed if someone did offer. There was no music; no clinking of glasses; no sounds of occupation beyond the occasional heavy footstep, car horns in the distance, and the loud compensatory beating of my own heart. The streets were occupied by me, trying to exist as little as possible, and the occasional older Italian man.

After wandering around the streets imagining my own demise in a multitude of ways I saw a soft glow in the distance; a gentle caress of light that slowly wrapped the cold Italian night in warmth as it beckoned me closer. The gentle babbling of water whispered against my ear as I crept forward in the night, eyes wide, heart hopeful. There, in the middle of a traffic circle was a park. And in this park nested among the trees was my fountain. My sweet, delicately carved fountain. The arms of the statues calling me closer in the night, offering me their light, their safety, their gentle reassurance in the uncertainly of night for a poor solo traveler.

I sat at the bench and watched the water bubble over the edges so calm and consistent. There was moss covering the edges of both basins and each drop of water slowly dangled from the edges of the plants before falling into the pool below. Dogs would come and splash in the water that overflowed from the rain earlier that evening. My photos are a poor representation of its delicate beauty. I watched the fountain for a while, resigning myself to maybe like the soft light and empty streets of Rome at night before walking back to my hotel.

Then came the rain.

And with it, the sudden cessation of my map.

I was alone, in the dark, soaked, and without a map forced to retrace my steps back to my hotel. Suddenly the gentle calm that the soothing waters of the Fontana delle Cariatidi had slowly eased into my body was gone. Everything was scary again. All of the earlier fantasies of being murdered, kidnapped, or worse came rushing back in full color and it took most of my nearly exhausted willpower not to run back. Instead I shuffled/jogged to my hotel by memory (have you caught the theme of my phone dying and leaving me without a map) and prayed I would make it before I died. Nothing happened to me of course.

So am a fan of the Roman night life? No, not really. I’ll leave it to the Pope to enjoy. The poor guy could use a stress reliever.

But this is what the fountain I staked my life for looked like in the light. It was truly beautiful. 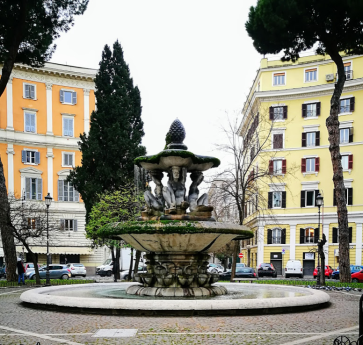